Here is an outline of the members of the Border family who were gunsmiths in Bedford County, including Rebecca Border's husband John Amos:

1743: "The Forgotten Ones" website of Ken E. Austin II indicates that Sebald Bader/Border, father of Johannes/John Bader/Border, was born in Maxatawny Township, Berks County, Pennsylvania in 1743.

1767: Sebald Bader is listed as a blacksmith with one head of cattle on the 1767 tax list of Maxatawny Township, Berks County, Pennsylvania. It is hard for me to imagine a blacksmith in that time and place who didn't perform at least some rudimentary gun repairs for the other settlers.

1769: Kline reports that the marriage of Sebold Border/Bader and Regina Rachel Bother occurred in Maryland on June 3, 1769. The individual Kline calls Sebold is called Sebald, Gebald or Gebalt in other sources. What you will find in old records written in cursive is that it is sometimes very difficult to distinguish some characters, such as capital G and S, or lower case a, e, and o.

1769: Although I doubt that the described location is right, the 1953 edition of "American Gun Makers" identifies Gebald Border as a gunsmith in Bedford, Pennsylvania in 1769, as does Frank Sellers' 2008 book "American Gunsmiths". The 2017 book "Gunsmiths of Bedford County, Pennsylvania" describes Gebalt Border as being a blacksmith.

1776: Kline reports that John Border was a son of Sebold and Regina Bader and was born in Frederick County, Maryland on June 29, 1776. I suspect she obtained this birth date from a church record, because it does not match the date one would get by calculating from information on the tombstone.

1776: Kline reports that John Border was christened with the name "Johannes Bader" on September 29, 1776 at the St. Peters Evangelical Lutheran Church in Frederick County, Maryland. Austin's website identifies the location of Saint Peters Lutheran Church as Woodsboro, which is 10.5 miles north-northeast of the town of Frederick, Maryland.

1794: Kline reports that Daniel Baker was appointed as the guardian of John Border on June 11, 1794.

1799: Kline reports that John Border was an apprentice of Taneytown, Maryland gunsmith Philip Creamer in 1799. Taneytown is 12.3 miles northeast of Woodsboro, where John Border was baptized. I'm not sure what Kline's report is based on, but I suspect she is mistaken about the apprenticeship. Curtis L. Johnson's 1993 book "Philip Creamer the most celebrated gunsmith in all the west" indicates that Daniel (not John) Borden/Border was an apprentice of Philip Creamer in 1799. Here is a copy of the Daniel Bordon indenture [Frederick County Register of Wills (Indentures) 1794-1801]. Johnson's book goes on to report that Daniel Borden/Border was born on January 17, 1783 and the apprenticeship ended on January 17, 1804. The book also reports that Isaac Shunk was the only other known apprentice of Philip Creamer in Maryland, and reports that Isaac Shunk and Daniel Borden/Border eventually appear on the rolls of the arsenal at Harper's Ferry. Here is a copy of the Isaac Shunk indenture [Frederick County Register of Wills (Indentures) 1801-1808].

1800: Evelyn Gibson's 1978 book "Blackburn and Allied Descendants of John Blackburn., Sr. ..." indicates that William Border was born on June 30, 1800 in Maryland and was a son of John Border and Mary M. (Black) Border. The Whiskers' 2017 book "Gunsmiths of Bedford County, Pennsylvania" describes William's father as Johannes Border, a son of of the blacksmith Gebalt Border.

Here is what Volume III of the 1906 book "History of Bedford and Somerset Counties, Pennsylvania" states about John Border I, his son Daniel, and his grandson Frederick:

The following excerpt about Daniel Border is from pages 480 and 481 of the 1907 book "History of Cambria County, Pennsylvania".

1805: Rebecca (Border) Amos (wife of the gunsmith John Amos) is buried at the Bedford Cemetery in Bedford County, Pennsylvania, where her tombstone states, "Rebecca Amos died June 7, 1888, aged 82 yrs 9 mos 24 dys". Based on the tombstone inscription, Rebecca was born on August 14, 1805. Various sources indicate that Rebecca is a daughter of John Border and his wife Mary Magdalena (Black) Border. was born on August 13, 1805.

1806: Kline reports that John Border's name is on a list of subscribers at Shellsburg's Old Log Church in 1806, as one of the Lutherans. She also reports that the church records list the christening of some of John Border's children.

1808: Kline reports that John Border purchased the 153-acre "Branch Hill" property on the waters of Dunnings Creek from William and Amy Blackburn on September 15, 1808 for 300 pounds. She reports that the property is within the bounds of St. Clair Township. Because of the acreage and the reference to Dunnings Creek, I suspect that "Branch Hill" may be the 1788 Bedford Township property represented by Survey Book A-27 Page 278. The 1884 book "History of Bedford, Somerset and Fulton Counties" states "St. Clair township (now East and West St. Clair) was formed in 1814." Looking at the 1792 Reading Howell map, it becomes clear that St. Clair Township was formed from Bedford Township.

1814: Kline reports that John Border contributed a dollar to the Schellsburg Old Log Church in 1814 toward completing the gallery (second story seating) of the church.

1814: Samuel Border, gunsmith son of John Border and his wife Mary Magdalena (Black) Border, is buried at Victor Memorial Cemetery in Victor, Iowa County, Iowa, where his tombstone indicates he was born in 1814 and died in 1886.

1815: John Border was one of the witnesses to the April 13, 1815 will of William Stiger of Napier Township, along with Thomas Ellis and Thomas Shepherd.

1818: Thomas Border is buried in the Edgar Cemetery in Clay County, Nebraska, where his tombstone includes the inscription "Thomas Border Apr. 28, 1818-Mar. 31, 1906". Thomas Border shares the tombstone with his wife Susan, with his daughters Sallie Dawson and Rebecca Defibaugh, and with his son-in-law the gunsmith Wesley Defibaugh. A website indicates that Thomas was a son of John Border and Mary (Ellis) Border.

I am not certain where the Border mill was located, because the waterway illustrations on the 1819 map are confusing to me.

1819: Kline reports that John Border purchased the 95-acre "Double Ridge" property from at least one Blackburn family member for $915.00 in 1819. She reports that this property adjoined other land of John Border.

1820: John Border appears in the 1820 census of Napier Township with one male and one female in the 26-45 age bracket, and various children

1821: Kline reports that Herbert Otto and John Border purchased property for building a school from Mary Otto, widow of William, on January 2, 1821.

1822: The following excerpt is from the January 3, 1822 section of the book "Journal of the thirty-second House of Representatives of the Commonwealth of Pennsylvania...":

1822: A website that contains information about John Border and Mary (Ellis) Border indicates that their daughter Sarah Ann (Border) Hite was born on May 23, 1822 and their son (the gunsmith) Enos Border was born August 28, 1822. These are the birth dates that seem to be carved on their tombstones. On Enos' weathered tombstone, it is difficult to tell if it really says "Aug. 28, 1822" or "Aug. 23, 1822". Sarah is buried at the Sandyvale Cemetery in Cambria County, Pennsylvania and Enos is buried at the Victor Memorial Cemetery in Victor, Iowa County, Iowa.

1827: A web page about John Border reports that he married Sarah Salome McCollach on January 25, 1827.

1840: Kline reports that John Border is enumerated in the 1840 census of Napier Township, but I don't understand the age brackets she lists, and need to look it up myself.

1841: Kline reports that John Border appears in an 1841 record (apparently a tax record) as a farmer with two head of cattle and a valuation of $40.00.

1844: Kline reports that John Border appears in an 1844 record (apparently a tax record) as a maker of rakes with three head of cattle and a total valuation of $26.00.

1848: Kline reports that John and Sarah Border sold the 95-acre "Double Ridge" property on the waters of Dunnings Creek to Daniel Border of Conemaugh Township, Somerset County (his son) on February 25, 1848.

1850: Kline reports that John Border appears in the 1850 census as a 75-year-old Maryland-born individual with a valuation of $200.00. Living with him is his 50-year-old Pennsylvania-born wife Sarah, 17-year-old Caroline, 13-year-old Susannah, 9-year-old Cyrus E., and 7-year-old Catherine. 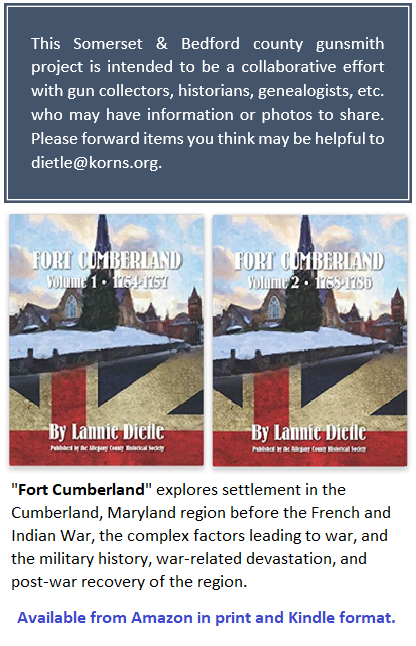